If you do not expect the unexpected you will not find it, for it is not to be reached by search or trail. ~~ Heraclitus

It’s been an age since I added any new content to my blog or visited any of my blogging friends (again!) but I am still around, still writing, and still trying to fit too many activities into the limited number of hours within each day.

Over Christmas and the new year I am taking a break from university study. I still have another month before my next semester begins, and now the chaos of Christmas is over I can collect my thoughts, attend to long overdue chores, and get my life back on track again.

This afternoon, I downloaded photos I’d taken during the past three months. As always, some photos turned out beautifully, some were blurred, and there were a couple of unexpected images.

We live on quite a long block of land and way down the back, in our next door neighbour’s yard, is a beautiful Jacaranda tree. Every spring, the tree treats us to a beautiful array of lilac flowers, so when it was in full bloom in October I zoomed the tree into focus when I could see what I thought was a common crow sitting on one of the tree’s branches.

I hadn’t looked at the photo until today, and to my surprise, the bird which I thought was a crow is actually a Spangled Drongo (Dicrurus bracteatus).

A distinctive feature of the Drongo is the fish-like tail – very unusual in a bird. In all the years I have been taking photos of my backyard feathered friends this is only the second time I have seen and photographed a Spangled Drongo.

The features of the bird are not very clear in the photo, other than the deep black colouring and the fish-tail, so I have added a link for if you wish to take a closer look at this unusual bird. I’m sure you will enjoy the beautiful flower-foliage of the Jacaranda tree as well.

I don’t know when I will get back to regular blogging, but I have a tentative New Years Resolution for 2019 – to add a new post once a week.

Can I keep my resolution? Only time will tell. 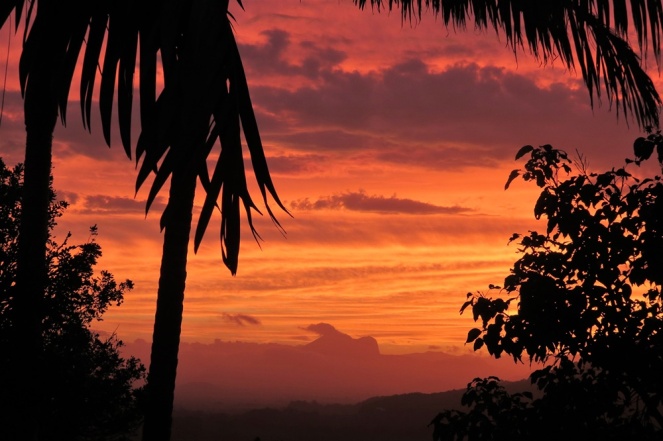 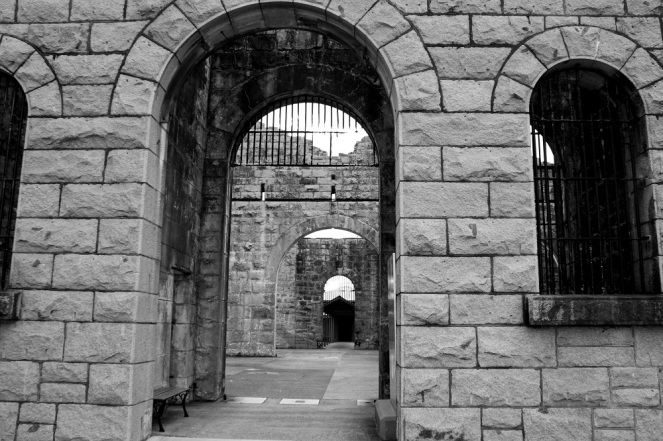 An assignment I recently completed through the University of Tasmania, The Photo Essay, called for a series of seven to ten photos, each captioned, to tell a progressive story of the students’ choice. I spent several weeks away from home late last year and found photo opportunities everywhere I went, so the difficulty with this assignment was choosing which series of ten photos would tell the most interesting story.

The last time I visited Trial Bay Gaol at South West Rocks it was too early in the day for the ruins to be open to tourists, but I did enjoy a lovely visit from a family of curious kangaroos, who had spent the night ‘behind bars’. This visit, however, the gaol was open to the public, so my husband and I spent some time wandering around the confines, camera in hand, learning some fascinating history of this beautiful area.

Last Friday, the grades for the assignment were released and I was thrilled with my mark of 46/50! And the assignment reminded me so much of a blog post (written as a Word document) that I decided to share it with you today – 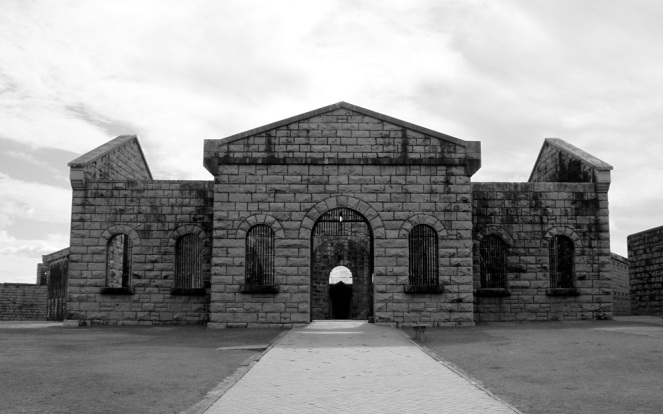 After walking through the entry of Trial Bay Gaol to the inner confines, the historic relevance is immediately evident. Now a South West Rocks tourist attraction, the roofless ruins stand as testimony to a time over a century ago when these buildings were used for a different purpose than they are today. 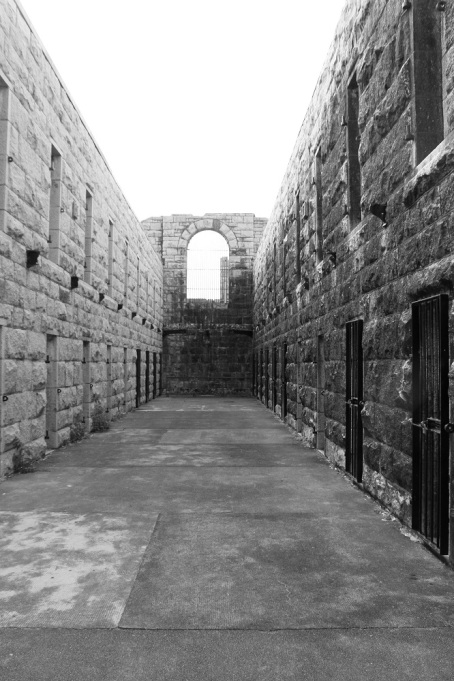 Arriving in 1876, the first high-risk prisoners’ days involved carrying out hard labour. At the end of the day, these inmates were searched and locked in their cells for the night, with lights out at 9 pm.

In an innovative project for the time, from 1889 the prison accommodated low risk, end of term inmates whilst they built a breakwater at Trial Bay to offer a safe retreat for passing ships. These prisoners learnt trades and skills while earning a small salary for their work.

Multiple arches provide visual portals into the inner reaches of the buildings, offering glimpses of what lies beyond.

A mock prisoner demonstrates the sparseness of the cells and confined space, behind the bars of the securely locked cell door. Living a solitary life for many years did not bode well for some inmates who suffered psychologically from the isolation. 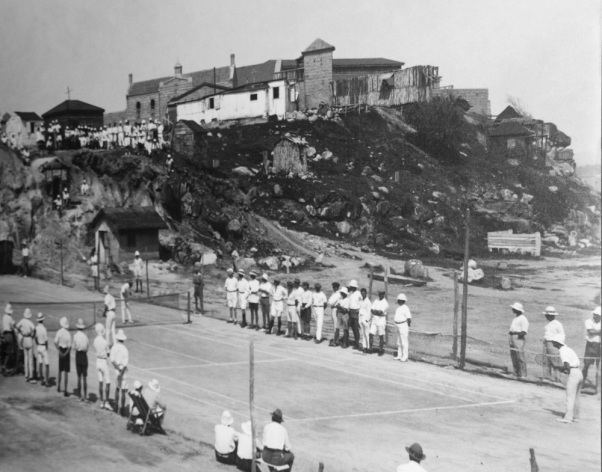 In 1903 the prison was temporarily closed but reopened again between 1915 and 1918 to be used as an internment camp. After the outbreak of World War I, German men living in Australia were regarded as a threat to the security of the Empire, therefore, some wealthier and better-educated men were confined at Trial Bay Gaol. During these years, interns built three tennis court in a disused quarry near to the gaol, enjoying the recreational facilities the courts offered.

Climbing approximately forty stairs to a tower overlooking the nearby surrounds, warders kept watch for ships in distress along the Pacific Ocean seafront. The gaol owned an old rescue boat which they used when necessary. The tower also served as an outlook for any escaped prisoners and of the eighteen escapees during 1887 and 1901, most were captured. 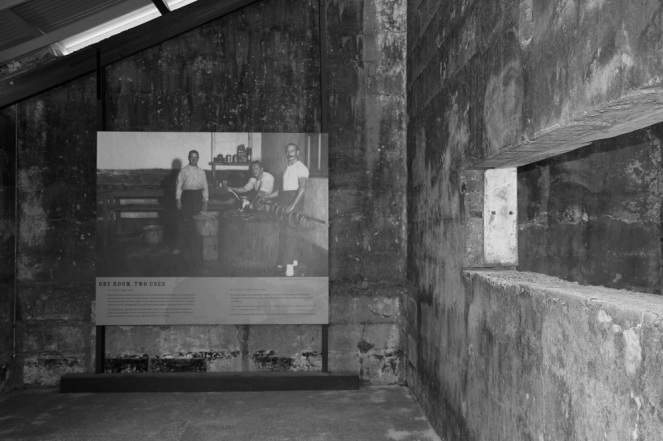 Within the three rooms of the kitchen, including a scullery and bakehouse, prisoners prepared meals for their fellow inmates on a wood fired stove. The large display picture shows the activity of inmates in a room now stripped of any evidence of its past use. 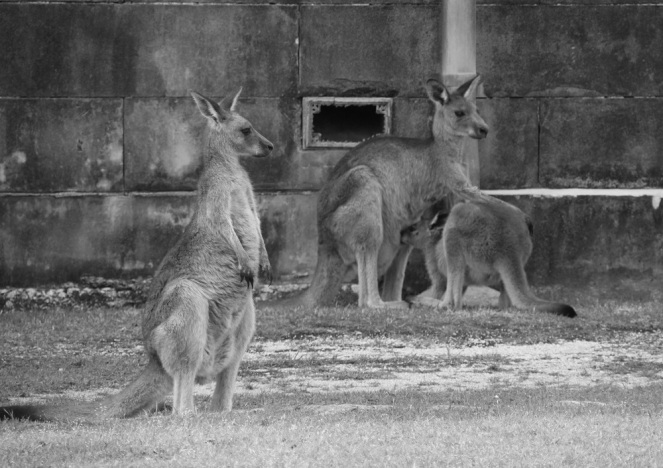 In a display of nurturing in the grounds of the gaol, a family of kangaroos pass away the hours, content within the safe enclosure of the gaol grounds. Signs in the area advise visitors not to approach the kangaroos, who can show aggression. 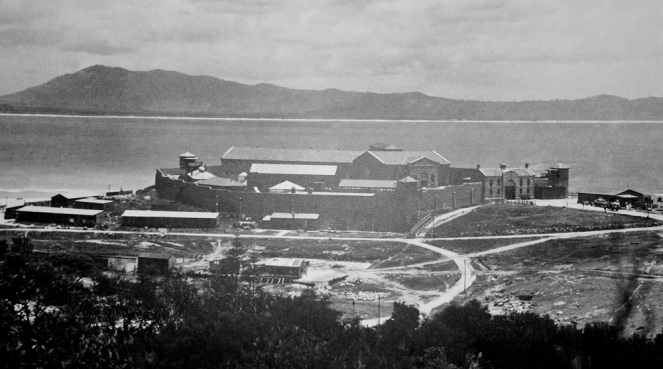 Situated amid a display of old photographs, this scene shows the gaol intact and in full use. The section of the building on the far right with the arched opening still stands today. The buildings behind have since lost their roofs. 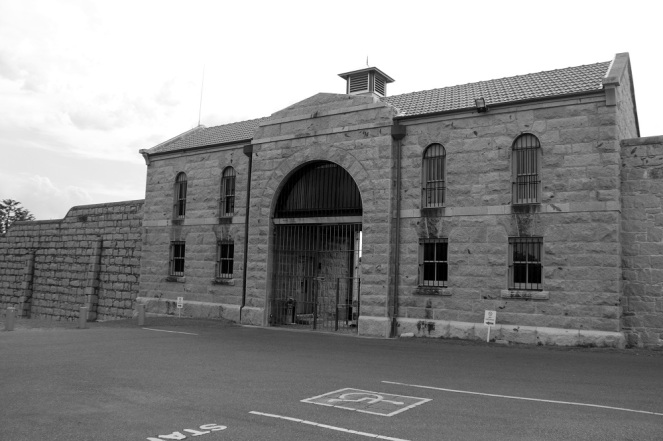 After the gaol’s final closure in 1918, the buildings were left abandoned. Since the 1960’s the old gaol ruins have become a tourist attraction, displaying the majestic sandstone buildings with details of the historic events that have taken place during the last one-hundred-and-forty years.

What a story these ruins can tell.