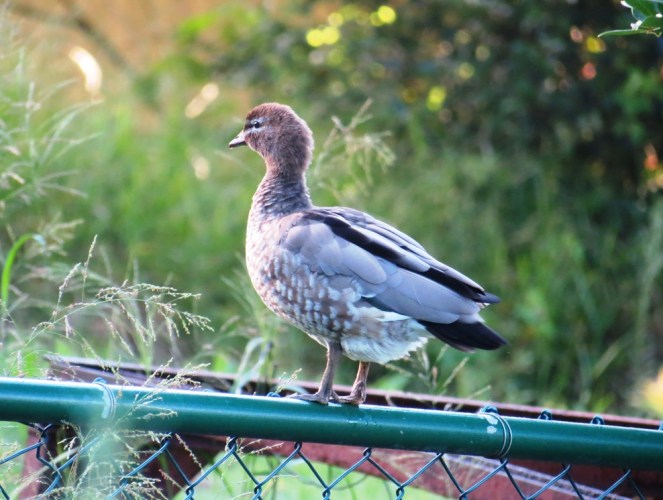 It is around 8 am Sunday morning, as I linger over my beloved computer, amid the messy desk where I have dropped opened mail for over a week now. I’m stealing just a few moments, catching up with a few blogging friends, knowing that soon I must leave again.

Work beckons. I thought I had completed making most of the school uniforms (that is my business, I make school uniforms for a few local schools) for the children starting the new school year at the end of January. Apparently not. Sales of school uniforms this year have increased drastically from the last few years. Schools have under-estimated the quantities they would be needing. Which is a good thing really, as it suggests that the economy has improved in my area.

“Quack!” What was that I heard? Am I going quackers? Being so engrossed in reading about snow storms on the other side of the world, I almost missed the visitor I had in my own back garden!

Mr and Mrs Duck disappeared a few months ago. I’m positive that somewhere out there, they now have a cute little family of ducklings. I haven’t seen their family, but I have seen other Australian Wood Ducks around, who have cute little ducklings trailing behind. I see them often, toddling along the banks of the creek, which I pass on my way to work.

My own ducky friends returned at the end of last month. Both Mr and Mrs have been here a couple of times, but this morning it was just Mrs Duck, perched upon the side fence, quacking away to….who exactly was she quacking to? She didn’t say….

The day has begun so quietly, everyone in my house is having a Sunday morning sleep-in, and even the birds are quiet. It seems that in the bird-world, as well as in the people-world, one or the other is having a sleep in. Mr Magpie came for a visit, Mrs Magpie was nowhere to be seen.

The sun is shining, the air is still, and I must leave for work again.

It will be a productive day. I know that. How could it be anything other, when I started the day so beautifully? 🙂