I awoke to a bright sunny day and a clear mountain, so took my first photo at 7:12am. You never know how long the mountain will remain clear on a subtropical summer’s day.

By 11:18am the valley was at its magical best. No clouds hampered the clarity of Mount Warning or the ranges, so it was time to take another photo. 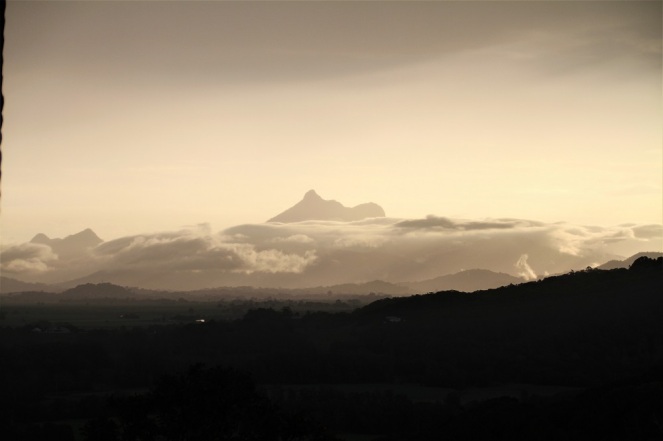 While we were eating lunch, my husband noticed a change in the weather, so checked the Bureau of Meterology website. He discovered that there were three storms heading our way, although he thought that perhaps we would only feel the tail-end effects of the combined storms.

Thunder rolled in the distance, light rain began to fall, and within half an hour the ‘storm’ was over. All that remained was the intensity of summer humidity, leaving the air so heavy you felt you could reach out and touch it. The heat this afternoon was the kind that makes me dread summer, every year. I loathe breathing in hot air and feeling as if there are a thousand spiders crawling across my skin! 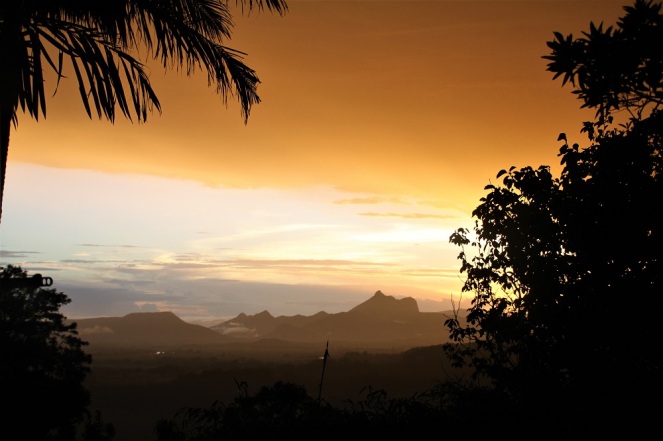 The swirl of misty clouds in the valley were replaced by a brilliant sunlit sky.

Beyond the yellow and orange, a patch of blue and cloudy sky continued down to the horizon.

This is how I cope with summer! Summer is the only season when the weather can change the appearance of the mountain and valley so drastically.

What an absolute blessing of contrasts nature provides. ❤