A slither of blueness returned to the morning sky today, just a slither, but enough to give me hope that today might just be the day the mountain would reappear, after sulking behind a wall of clouds for the past four days. 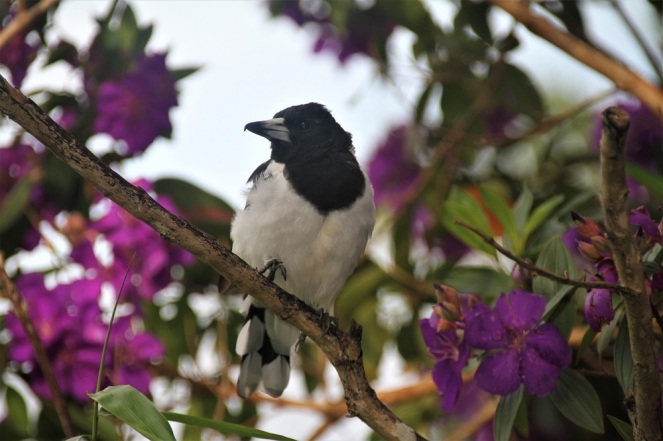 Little Hoppy (of gammy leg fame) was on standby, watching the mountain with me. I can always count on Hoppy to drop by every morning.

But wait – the Three Stooges are here as well, with clean and fluffy feathers after several days of being washed by the rain – repeatedly.

Not to be outdone, baby magpie waited patiently for me to turn around and take a photo of him as well.

Meanwhile, the mountain remained mostly hidden for most of the morning.

Early in the afternoon, most of the cloud cover had disappeared. Seeing the beautiful vivid blueness of the ranges is good for my soul, even if a few clouds lingered.

Less than an hour later, we had a complete mountain view!

I kept on checking the mountain today, and she was full of surprises. At dusk, even though she had caught a few clouds again, the setting sun’s dazzling rays shone across her lower ranges.

Quite a few daylilies appeared today, so while I had my camera in hand, I thought I’d better preserve some of their splendour. They are called daylilies for a reason, and will be gone by tomorrow.

During the few short minutes while I had wandered off to visit the daylilies, the mountain had changed again, this time darkening in preparedness for nightfall. Today, however, Mount Warning had one last treat remaining …